FIRST CAN ON THE MOON

16 Mar FIRST CAN ON THE MOON

Posted at 11:24h in Uncategorised by mrstubbycooler 0 Comments
0 Likes

Or… ‘They call me moonwalker’

G’day champions, Stubbsy here. Did I ever tell you that I was the first man on the moon? Yeah, yeah, most people reckon it was Neil Young or whatever his name is, but it was me, and here’s what happened.
I was at the International Stubby Cooler Convention in Florida, which is right next door to that big space centre they have there. The neighbours were being a bit noisy, firing up their rocket engines and all that, so I popped over to tell them to pull their heads in. We had important things to talk about, because quality triple stitching had just been invented and was revolutionising the stubby cooler industry.
I stuck my head into a little room and saw a couple of fellas who were strapped into seats and looking pretty thirsty – no wonder, because they were wearing these thick space suits. I sauntered over to offer them a cool drink in a custom-printed stubby cooler, when a countdown came over the loudspeakers. You can see where this is going, right? Anyway, when it got to zero the rocket launched and I was on my way to the Moon. Weeeeeee! 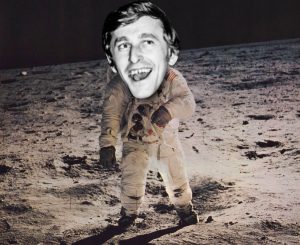 The astronauts were extremely grateful for the cool drinks, so when we got to the moon they insisted that I step out first. They didn’t have a helmet big enough for my large, masculine head, but that’s alright because I can hold my breath for a really long time. The world watched as one as I set foot on the moon, flashed the camera a thumbs-up, and uttered the immortal line:
“That’s one small step for man… one giant leap for stubby coolers!”
You might not be able to walk on the moon, but you can design your own quality stubby cooler, right here at Mr Stubby Cooler!

Sorry, the comment form is closed at this time.